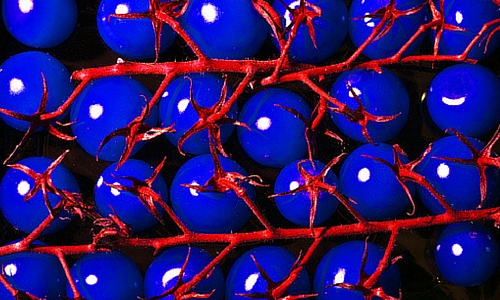 04 Feb Get Your Head Around International Film Sales: Tomatoes

Once a year my father used to say to me “Samantha, what exactly is it that you do?” I’d explain, again, that my job was to try and find films that I thought would have a chance of working internationally; that is to say in, and outside of, their country of origin. That my job was essentially licensing rights and being an expert in worldwide distribution. And that was that, until the following year when a voice would pipe up, “Samantha, what exactly is it that you do?”

If only I had thought “I know! Tomatoes.”

THE MARKET. I used to go off to the huge international film markets three times a year (The American Film Market, Cannes Market at the same time as the festival and The European Film Market running alongside Berlin Film Festival).

Think of these film markets as the biggest fruit and vegetable market you’ve ever seen. Covent Garden in its heyday perhaps. 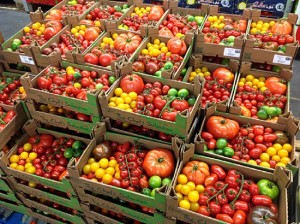 STALLHOLDERS. Now I’m a stallholder, one stallholder among hundreds of other stallholders, vying for the attention of the potential customers wandering by, many I’ve known for years, some are new and I need to get to know.

I’m known for tomatoes. I sell a few other things, which can be confusing to my customers who aren’t used to coming to me for cucumbers, but they will take a look, because they know I have quality produce. But tomatoes are my speciality. The thing is, a lot of other people sell tomatoes as well. So I need to stay on top of my game, and make sure that my tomatoes are as good as, or better than, the other guys’.

FARMERS. I run a turnover business so I need to be constantly looking for new and better supplies from exciting but reliable farmers (that’s you) who may be able to provide me with exciting new types of tomatoes. They need to be the same but different. Not too the same, and not too different, I don’t want blue tomatoes. No matter how cool we both agree they look, I know I can’t sell blue tomatoes.

GREENGROCERS. My customers are greengrocers in lots of different towns and villages, of different sizes and with different customer bases. And they too compete with each other within their towns because there’s only so many tomatoes anybody wants to eat and theirs have to be better than the greengrocer’s up the road. I would like to think they were loyal to me as a supplier, but actually what they want are the best and best value tomatoes.

NB. There are certain places where no one eats tomatoes at all. My business isn’t very good in those towns. Now and again I make an effort to hunt new customers down. But if they don’t eat tomatoes, they don’t need tomatoes. What can one do? Not waste my or their time and energy trying to sell them tomatoes is what one can do. 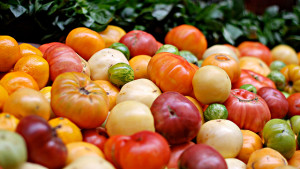 TOMATOES: THE “SAME SAME BUT DIFFERENT” PRODUCT. Last week one of my competitor stallholders introduced a new concept in tomatoes brought to him by a farmer: “heritage tomatoes” (probably starring Judi Dench). Despite the fact they were expensive, he cleaned up, selling the lot to a greengrocer in Stoke Newington. That’s because he knows his customers, and what they want. It was an educated risk.

NOT TOMATOES. This week, a farmer we’d never met before showed up. She had a brand-new fruit that nobody had ever heard of called a Wiggly Woo. I tasted it and it was pretty good, but it looked bloody weird. And the problem was, I know my customers. They aren’t going to spend a penny on anything they aren’t sure they can sell, especially if it isn’t aesthetically pleasing, it doesn’t matter what it tastes like. The risk is that everyone takes a look, thinks “not sure what that is, but I’m pretty sure it’s not for me” and passes it by. So it sits on a shelf until it rots and is totally valueless and both I and the greengrocers have lost money. 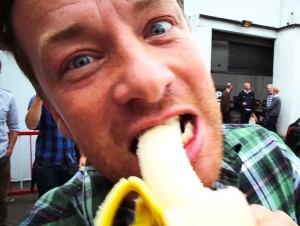 PROMOTING NOT TOMATOES. The only way to get the Wiggly Woo to sell, is to find a way to make it more attractive, and that means finding someone very famous in the right field, and it has to be the right field, to tell everybody how delicious it is. Or by spending a lot of money on advertising in order to try and persuade people that it’s delicious.

In the first instance you had better hope that it is actually delicious as, if it is, people will start telling people how delicious it is, and the word-of-mouth can make the Wiggly Woo the next kiwifruit. In the latter case, even if it isn’t delicious you can at least ship out the first load but don’t expect anyone to come back for more. And even if it is delicious, no matter how much famous people talk about it, no matter how much you spend on it, if no one buys it, the Wiggly Woo can still end up as compost.

LOSING MONEY ON NOT TOMATOES. After all, we all remember the time that one of us stallholders teamed up with a farmer and attempted to sell a cross between a potato and banana. He was very convinced it would sell. After all, he said, everyone loves potatoes, and everybody loves bananas. We could see his logic, but we feared for him. And we were right. His “banato” didn’t sell because it felt all wrong; and he had to leave the market because no one would buy anything from him any more because they no longer trusted his product.

Some of my competitors might go for the Wiggly Woo, there’s a few people brave enough. One of them is still trying to flog dragon fruit, I can understand why: good name, looks cool, doesn’t taste bad but if people want a banana, give them a banana. That’s what most of us round here feel because most of us don’t have the money, time or energy to attempt reinventing the business. 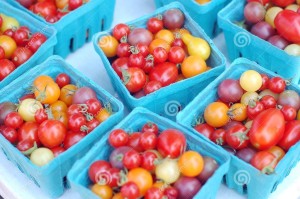 CHERRY TOMATOES: A SUREFIRE SUCCESS? Now I have a brand-new tomato. I’m very excited about it because I think I can sell it. It’s called a “cherry tomato”. People will know exactly what it is when they look at it, there’s no confusion there, it’s a very cute and dinky little tomato and comes in lots of colours which makes it very appealing visually. Plus it actually tastes delicious.

I think my customers are going to love it because children want to try it which is the Holy Grail in the vegetable world, parents will want to put it in lunchboxes, in fact my target market for cherry tomatoes is so clear, there’s no point, or need, in bothering to try and sell it more widely. If I did, I could waste time and money unnecessarily.

OFF TO MARKET. So, I’m off to market. I’m assuming there’s going to be other people there with cherry tomatoes as well, or something very like them, after all, word gets around. So I just hope that mine are the best, the most nicely packaged too as that can make a big difference, and that my voice is louder than any other stallholder’s. Wish me luck.

Because now and again, in our dusty old vegetable market of tired old stallholders, jaded greengrocers and rotting tomatoes, sometimes, just sometimes, a farmer comes along who you would not only buy Wiggly Woos from, but even blue tomatoes, and that’s when we remember what we were all doing here in the first place

Become part of The Vipers Nest Community on Facebook